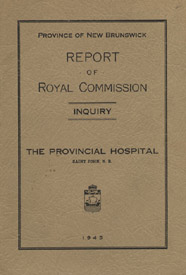 Abstract: Royal Commission on the

In early , a series of reports appeared in a newspaper, . The stories were written by a reporter, hired as an attendant at the Provincial Hospital in , New Brunswick. The reporter, , went to work undercover in the hospital, because three disgruntled ex-employees had sent letters condemning the hospital's practices to The Standard's editorial staff. It is evident that those who ran the hospital and those politicians in whose constituency these wrong-doings allegedly occurred were greatly distressed by the bad publicity. The commission was created to counter the allegations made by Johnstone and the three former employees. The former employees were easily dismissed as either criminal, mentally ill, or, interestingly enough, having links with members of the . However, Johnstone's allegations would take more effort to dismiss.

Unlike the stories that appeared in The Standard, the commission found that the hospital's "care and treatment [was] good in every department of the institution." Any problems that did exist were a function of inadequate staffing resulting from war-time shortages, rather than any structural defects.

From their findings, the commission made a series of recommendations, rather banal though they were. The following are some examples of those recommendations: four doctors should be given special commendation for outstanding work during the war years and "substantial pay increases"; World War II veterans should be moved to a veterans hospitals; another building should be constructed to handle the overcrowding problem; there should be a minimum of six psychiatrists on staff; and, the establishment of a Board of Governors to be appointed by the Premier and Executive Council was "strongly recommended".