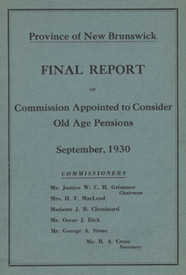 Even though the Order-in-Council of , created a commission to inquire into the cost and applicability of the Federal Old Age Pension Act, by the time the Commission reported, the Legislature had already passed an act regarding Old Age Pensions. Thus, the Commission's task remained to estimate the cost of operation.

Though the majority of the final report consists of a county-by-county breakdown of potential pensioners and the associated costs therein, there are some interesting aspects of this Commission. Six commissioners were appointed to oversee this inquiry, , , , , and , and . It is interesting that to note that women were only included on commissions which dealt with traditionally female roles: Pensions (the care of the elderly); Mothers' Allowance (the care of women); and the Factory Act (the supervision of the young).

Also of interest, and in common with the Mothers' Allowance Commission, is the lack of any discussion of universality. The pension program was not designed for all persons over a certain age, but those over a certain age who qualified under specific criteria. For instance, the Commission recommended that those elderly persons living with sons or daughters might be disqualified from the program.

Equally compelling were the means by which the Commission thought extra income might be generated to pay for the program. One proposal was to institute a ten cent tax on magazines published outside Canada, which contained over twenty per cent fiction. The proposed tax would raise revenue or at the very least "would tend to restrict the sale of the more objectionable class [of magazines]". Further, as per the federal pension legislation, provision was made for assignation of pensioners' real estate to the Pension Board, thought it was not compulsory. Upon the death of the pensioner, the real estate would be sold and the Board would reimburse itself from the proceed, plus five per cent!