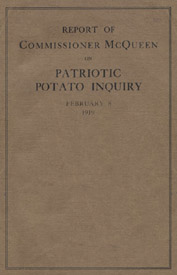 In , a scant month after the declaration of war in , the New Brunswick Government passed an Order-in-Council which bestowed on the . About a month and a half later, New Brunswick's gift was extended to include the people of . Just over $150 000 was apportioned for the execution of the project, which was to have been sufficient to purchase somewhere in the neighborhood of 60 000 barrels of potatoes.

To say that the project was a singular example of political greed and graft would be an understatement. , the Commissioner who oversaw the inquiry into the Patriotic Potato Gift, made his amazement at the scope of the wrongdoings clear: "The way in which this Patriotic Gift was handled . . . is a remarkable disclosure, and if sworn proof and documentary evidence had not been produced before me in support thereof, would be almost incredible." Nearly 70 000 barrels of potatoes were purchased by the government, but just over 51 000 barrels found their way to Europe. Curiously enough, most of the remaining "surplus" potatoes found their way to .

The project was a series of shady transactions, scams, kick backs, and conflicts of interest, which reached all the way into the Premier's, the Minister of Agriculture's, and the Attorney-General's office. Ultimately, Commissioner McQueen found that the process had been rotten from its commencement: no tenders were called but certain people were "selected" to broker the deal, including a sitting member in the Legislature, ! Auditing practices were completely ignored because monies were coming in illegally and, to try to pay off the over $30 000 debt the government accrued in the Potato debacle, made a deal with a local businessman who agreed to pay the government's debt in return for a lucrative construction contract.