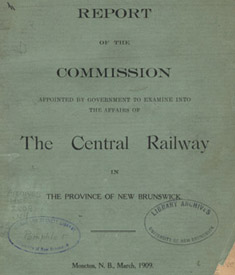 Not unlike other stories of Canadian railroad construction, the Commission which examined the building of a fifteen mile stretch of track between and the found ample evidence of graft, corruption, kickbacks, destroyed evidence, and glaring conflicts-of-interest. Commissioners , , and , were charged with examining the business practices of the New Brunswick Coal and Railway Company, awarded the construction contract in 1901 until 1905, at which time the Lieutenant Governor made the company a corporate ward of the Province.

Like Commissioner 's reactions at his findings in the Patriotic Potato Inquiry, the Commissioners were unabashed in voicing their amazement and disgust with the manner in which business was conducted between 1901 and 1905. And, like McQueen's investigations, the wrongdoings sprung from granting government contracts to those intimately connected with the government, namely the Provincial Secretary and Attorney General.

The Commission's report is a scathing indictment of all involved. For instance, the report stated that "the company never performed the functions usually exercised by an incorporated company - it was in fact nothing but a disorganized department of the Government of the Province". They also reported that not only was the company negligent in their accounting practices, but that "it was never the intention of those controlling the Company to keep books of accounts for public purposes".

Finally, the Commission recommended that the Directors of the Company, including the Attorney General and Provincial Secretary, be held responsible for the unaccounted funds, and in a "charitable construction of the entire transaction" found them personally liable for $134 035.35.