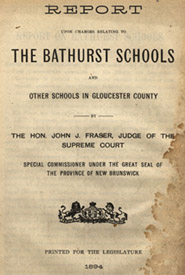 The animosity which led to the creation of this commission is the sort that could only be borne out of sectarian differences. Recognizing the potential for continued turmoil, the appointed Justice to make the inquiry.

Tensions over educational matters in Gloucester County dated back decades before the Bathurst School Commission to riots in in the early 1870s. This Commission, however, was instigated by the complaints of Reverend . Though there were fifteen separate complaints made by Thompson, the overriding theme was the charge that the was trying to take control of the local common schools and teach Catholic dogma. The complaints often took the conspiratorial form of what is still commonly referred to, though now generally ironically, a "papist plot".

Justice Fraser dealt with the individual complaints as befitted a Supreme Court Justice, methodically and judiciously. Although he found that Thompson's complaints had some validity, on the whole the accusations were not borne out by the evidence. For instance, on the most serious charges, such as clerical interference in educational administration, that Protestant children had been forced to kneel and cross themselves, and that Protestant children had been penalized for the religious affiliation of their parents, were all dismissed by Fraser.

In the end, Justice Fraser stated that "I do not think the evidence shows that there is or has been any endeavour to bring such schools into harmony with and make them subservient to the Roman Catholic Church."