New Brunswick. Commission Relating to the Public Encouragement of Agriculture. 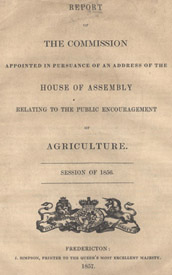 Abstract: Report of the Commission appointed under Address of the House of Assembly relating to the Public Encouragement of Agriculture, 1857

In the mid-1850s, New Brunswick's agricultural sector was lagging behind that of other locations in British North America and the northern American states. Appointed in 1856, the Commission reported that and Canada had agricultural surpluses, while one-third of agricultural products consumed in New Brunswick's were imported. This problem of self-sufficiency was not a result of "the culture of her [New Brunswick's] soil", but rather was a function of the "backward state of Provincial Agriculture".

The report notes that New Brunswick's chief exports were lumber and ships and, as those exports tended to fluctuate greatly in price, it was important that the colony be agriculturally self-sufficient. Two main remedies to this problem were proposed: the creation of a model farm to facilitate greater knowledge across the colony and a centralized agency to oversee agricultural activities. The model farm was to be established along the at a proposed cost of £5600. In typical nineteenth century fashion, great emphasis was put on the regularization and science of practice. The report noted that "all things should be done by number and measure and weight, and the establishment should be a model of order, energy, and intelligence, combined with proper discretion and economy."

The Commission also found that there should be a composed of a member from each county, three from the , and the Professor of Chemistry from King's College at Fredericton. This Board would meet periodically and make recommendations about the state of agriculture in the province, which would be found in an annual report.