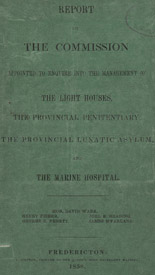 Abstract: Report of the Commission appointed to enquire into the Management of Several Public Institutions Receiving Provincial Aid, 1858

In mid-nineteenth century New Brunswick, the government of the day decided that an investigation into the management of some of the most costly provincial institutions would be undertaken to "insure greater economy in their management." The institutions in question were the , , , and the of New Brunswick. It is clear from the introduction to the Commission's report that this exercise in austerity would not have been unfamiliar to those who have suffered through the downsizing mania of the late twentieth century. The report ultimately concludes with the recommendation that, for efficiency's sake, all four institutions be governed by one central board. Nonetheless, the report, though obvious in its intent and execution, does provide some substantial historical information about important institutions of the period.

Of the four bodies mentioned by the report, it is the and the that receive the majority of the Commission's attention. The Commissioners discussed the historical antecedents to all the institutions under examination, and their suggestions about ways to save money in running the penitentiary and asylum are most illuminating. For instance, in an effort to save money for the prison, the Commissioners made such recommendations that the quality of bread should be decreased (and female prisoners should bake it) and the amount of food for prisoners should be lessened. Similarly for the asylum, they decided that too much money was going to clothing patients and that the asylum's use should be restricted to "bona fide lunatics": "idiots and imbeciles, should not be admitted unless they are found to be dangerous at large."